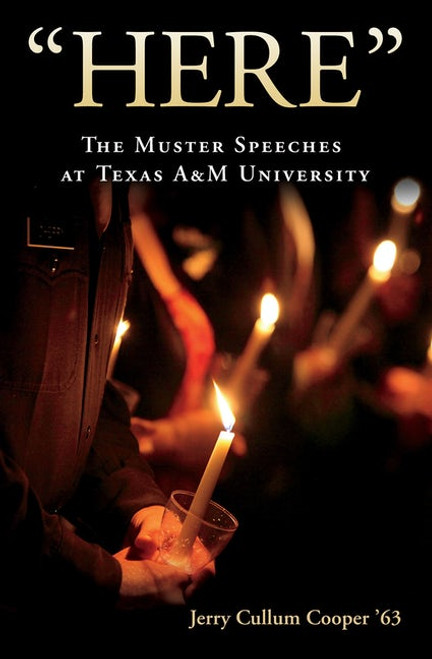 What began in the 1880s, when former students gathered to live over again their college days, became in the 1940s the sacred tradition of current and former students congregating to read aloud a roll call honoring Aggies who have passed. This tradition is Muster—an enshrined and enduring legacy of Texas A&M University and a solemn symbol of togetherness, as evidenced by the more than 300 Musters held in locations worldwide every April 21. Muster is how the Aggie Spirit, comprising every Aggie who has ever lived, is remembered and celebrated.

In “Here”: The Muster Speeches at Texas A&M University, Jerry Cullum Cooper presents the 72 keynote addresses delivered on the university’s campus in College Station to date. The restoration of these speeches proved challenging, as many were hidden in archives and newspaper fragments and others on phonograph recordings. Within these speeches are the commanding voices of military heroes such as Dwight D. Eisenhower and James Earl Rudder and the stirring words of political leaders, including former Texas governor Allan Shivers, and Aggie trailblazers like Frederick D. McClure, the university’s first African American student body president.

Together, these voices represent the Aggie Spirit, giving us historical snapshots and perspectives of the university, the state, and the country spanning two centuries. Most importantly, they continue a hallowed tradition that honors those who have gone before and inspires those who remain. Whether a reference for future speechwriters or a unique look into university history, “Here”: The Muster Speeches at Texas A&M University is a celebrated and necessary addition to every Aggie collection.